As the infrastructure investment needs of emerging Asian countries continue to grow, obtaining financing is becoming increasingly difficult. The COVID-19 pandemic has exacerbated issues and highlighted the importance of broadening infrastructure financing options in Asia. Fintech is presenting itself as one potential solution. 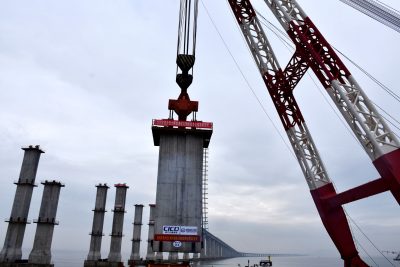 The public sector continues to finance the majority of infrastructure in Asia, although the private sector is becoming increasingly involved through public–private partnerships (PPPs) and privatisation. Approximately 70 per cent of Asian infrastructure funding comes directly from the public sector. The private sector contributes about 20 per cent and multilateral agencies such as international development banks contribute the rest.

Technology-enabled financing platforms have grown significantly in recent years, becoming a popular choice for small projects that would have had difficulty obtaining capital from traditional creditors. Crowdfunding and tokenisation are some examples, though there have been few infrastructure projects financed by these tools so far.

Crowdfunding involves individuals pooling funds to finance businesses, projects and other enterprise or individual needs. Funding can take the form of debt, equity, royalty, reward or donation. A crowdfunding system involves investors, a capital recipient or borrower, and a marketplace platform. The link between the investor and the capital recipient is more direct than that through the banking system.

Tokenisation is another capital-raising option with less reliance on traditional intermediaries. After government-issued funds are converted into tokens, payment, clearing and settlement no longer need to pass through banks or other custodians, removing some financial barriers to investor participation.

Tokenisation, in the context of infrastructure, divides the value of assets or the underlying securities into smaller parcels before they are offered to potential investors, increasing the number of investors able to participate and reducing reliance on large institutional investors. Tokens also carry lower transaction costs than traditional securities — their digital nature makes currency usage more efficient, while blockchain technology enhances transparency.

Crowdfunding and blockchain tokens have been used to finance projects in a variety of different sectors. For instance, crowdfunding has emerged as an important source of funding for water infrastructure, particularly for relatively smaller-scale projects. Successful examples include the Pitak Project in the Philippines and the Water for Arubot project in Nepal. A strong need expressed by the community, together with transparency and promotion, are some of the key factors underlying the success of digital financing.

Both of these projects involve small remote communities. The Pitak Project promotes sustainable living through natural building and permaculture. As local supplies of water and electricity were unreliable at the project site in Tubao, the project crowdfunded the construction of a solar-powered deep well pump and water storage system.

The Water for Arubot project aims to transform a nearby river into a reliable water supply for the villagers of Arubot who are currently dependent on rainfall. Launched by visiting trekkers, the crowdfunded project has reached the feasibility study stage, with experts now determining the project’s technical requirements in consultation with the community. The campaign is ongoing to fund the project’s implementation.

The advantage of crowdfunding is that it allows projects to proceed without significant public sector involvement. But despite some successful examples, the use of crowdfunding and tokenisation to finance public infrastructure in Asia remains limited. It is mainly for last-mile needs and largely reliant on goodwill donations. The continued growth of fintech will depend on adequate risk assessment, especially for large transactions like infrastructure projects. The availability and depth of secondary markets is another important factor in facilitating the effective use of alternative funding channels.

Supervision and regulation of fintech is progressing in all emerging Asian countries, but the scope and strength of the regulations vary by country. Regulations on peer-to-peer lending and crowdfunding are less developed in the region — several Asian countries have only issued such legislation recently or have yet to do so. Openness to cryptocurrencies also varies by country, with some fostering a business environment for it, while others severely restrict its use — though none consider it legal tender.

Most emerging Asian countries have instituted regulatory sandboxes — controlled environments for testing fintech applications and associated regulations. Eligibility for the sandboxes varies by country. Meanwhile, cybersecurity laws are slowly catching up with criminal practices, though the laws will require regular updates to reflect changes in criminal behaviour. This is particularly true given the increased reliance on digital services due to the COVID-19 pandemic and related physical distancing policies.

As alternative funding channels move into mainstream, governments may become more willing to turn to these platforms for public infrastructure projects. Although there are challenges to its widespread use, fintech is unlocking new opportunities for investors and communities amid Asia’s infrastructure boom and the financial fallout of COVID-19.

Kensuke Tanaka is Head of the Asia Desk at the OECD Development Centre, Paris.